Economic Political Spectrum Part 3: Not the parties, it is matter of civilisations

My spectrum, based on both civilisation and economic policy: 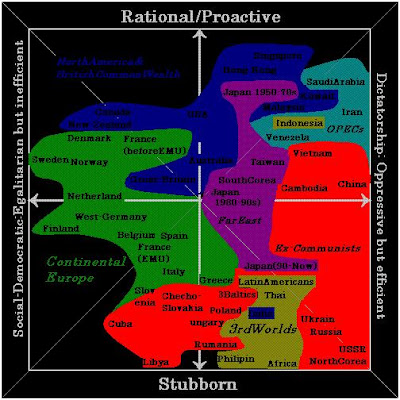 Finally, I would like to conclude the critique of Nolan's spectrum in this chapter. As a matter of fact, I would like to highly respect Prof. Nolan's work on his spectrum which clearly analysed the identities of conflicting ideologies among political parties, social classes, and various individuals throughout history. Also, his work successfully denoted and clarified the difference between economic liberalism and social liberalism, between traditional conservativism and business conservativism, between Marx-Leninism and Neo-Marxism, and between totalitarian socialism and social democracy by rejecting politics by the traditional one dimensional measure. Without a doubt, Prof. Nolan's work is simply splendid.

However, his analysis is entirely based on the outcomes that conflicting ideologies "wish" to bring. Although Nolan's spectrum enables to distinguish a domestic political conflict among various parties in the western society, it is less likely to indicate the average political slant in nations and the different cultural backgrounds. I was recently more convinced by "Inglehart-Welzel Cultural Map of the World" which more precisely denotes the outcomes all nations have achieved and the average of political slants and cultural values of politics in nations. The reason is because at least this spectrum shows the cultrual difference among civilisations. However, this spectrum abandons the perspective on each different economic policy and its priority. Furthermore, I insist that different perspectives on "the relationship between democratisation and its economic cost" and "macroeconomic aspect influencing on political environments" should be clarified as well by having mentioned in the previous chapter. Therefore, I interwove Inglehart-Welzel Cultural Map of the World with my own analysis my own new political spectrum.


Focusing on the political distinction among civilisations, in terms of the western value democracy based on the secular education system, which guarantees pluralism in self-expression, is the most civilised form of society and nation. However, some countries may be suitable to form a dictatorship, a theocracy, an anarchy or probably any other sort of alternative options. Prof. Nolan defined that more secular and democratised implies more people are liberalised and liberated by means of the social scale. Nonetheless, this aspect varies across each different civilisation and level of economic development. For example, some nations need a strong law enforcement and a huge government expenditure to bring a stable moral consensus and modern progressive secular-education. Also, although some nations become democratic they may face the fear of social unstability and stagnated economic development so that people might not be able to enjoy their liberty in life. Thus, having been analysed in Inglehart-Welzel's spectrum, the distinction in civilisations is far more valuable to take into the consideration.


Nevertheless, Inglehart-Welzel Cultural Map of the World has also a particular disadvantage to analyse economic sides of the issue. This spectrum assumes a policy is strictly rigid inside their cultural criterion. Also, this makes complicated to define "systems" these nations operate. For example, there is no doubt that countries within one cultural criterion share similar social and political values but they might have distinctively different systems of economic and social policy. Furthermore, Inglehart-Welzel's spectrum defines that "raionalism" mainly implies trading off between "secularism and traditionalism". Instead, I would like to redefine "rationalism" in terms of macroeconomic policy and pragmatism of national government. Furthermore, my spectrum took the choice between secularism and traditionalism out of the analysis because dictotorship can enforce either secularism or traditionalism and true social democracy should imply admitting the balance between secularism and traditionalism. In my spectrum, self-expression value is more likely to imply social democracy and servival value is more likely to imply dictatorship, however, I would like to also put emphasis on the economic cost to achieve social democracy. On the top of that, economic rationalism, not the cultural rationalism Inglehart-Welzel's spectrum shows, has a huge effect on economic development which is also the key for social maturity and stability.
Posted by Art_Blue_Liberalism at 10:47 pm