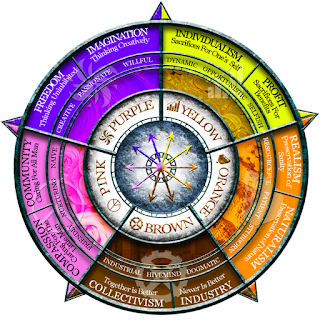 The new Magic the Gathering (MTG) colour wheel seemingly recently invented by Wizard of the Coast. This looks like based on the modern world version unlike the traditional colour wheel based on the ancient-medieval fantasy world.


My own interpretation is as follows:


Also, the list of the political theories and theoriests compared to these 5 colours is as follows:

This one was easy to think which ideologies and theoriest to fit in with the colour characteristics. Yellow regards highly of indivdiualism, dynaminism, and rational egoism. So, Rationalism invented by Thomas Hobbes (Rational decision making and Moral Relativism), Classical Liberalism started from Great Britain in 18th century and Objectivism invented in 20th century are this category.

This colour group supports a strong idealism (Nothing is impossible), unlimitted progress of technology, and optimism about further evolution of human-beings and their surrounding environment. It does not focus on the development artificially encouraged by a collective method: It devotes in the development encouraged knowledge of individuals and scientific discovery. Many "scientists" join Purple because they always seek the "unknown truth" and optimistic about technological advancement by humans' autonomous will. Spinoza's philosophy of believing in making a decision and moral judgement by logical deduction should be categolised into this group. Kant and Hegel challenged to seek an unknown ideal which has not been thought as possible in human minds and human community. So, both the philosophy of Kant and Hegel belongs to Purple.

Orange is pessimistic about secularism, the idea to rely on the completely autonomic will of human-beings, and development in general. This group put emphasis on need of God, tradition, and/or royalty to a sovereign. Also, this insists on balance and moderation in the reality.

This group puts emphasis on "control", "command", and "collective method". Brown regards everything should work as though they are parts of a giantic machinary, and never regards people as individuals. Brown likes using advanged technologies but has a poor ability to inovate new technologies themselves. The group of Brown believe in the power of group and homogeneousity rather than individual, freedom, liberty, autonomy, and uniqueness. Brown also relies on a heavy bureaucratic structure. The quantity is power, so the bureaucracy which keeps the big quantity of people and machinaries working together.


Pink: Hippie, Utopianist, Romantist, Counter-culture, and many not politically involved ones: Paganist, Buddhist, Tolstoy, Gandhi, Hippies, and many ordinary girls and women

Well, those who belong to Pink are emotionalist rather than thinker. Majority of the Western philosophies do not fit in with what Pink regards highly of. Furthermore, it demonstrates a strong feminity (Different from Feminism) in its idea. Girls and women in all over the world may think as this group does.


Yellow is what I would like to be and my own political theory is closest to. Brown is my least favourable group, and completely opposing to my philosophy. But, I have sympathy to Pink, and I have been supported by those who would believe in Pink's characteristics. I like the balance which Orange insists on, and the community Orange forms might produce me a good security of life. Nonetheless, Purple's secularism attracts me more than Orange's conservativism. All in all, I would categorise myself to be "between Purple and Yellow" which is completely opposing to Brown, and different from but sympathetic to Pink and Orange.
Posted by Art_Blue_Liberalism at 6:59 pm